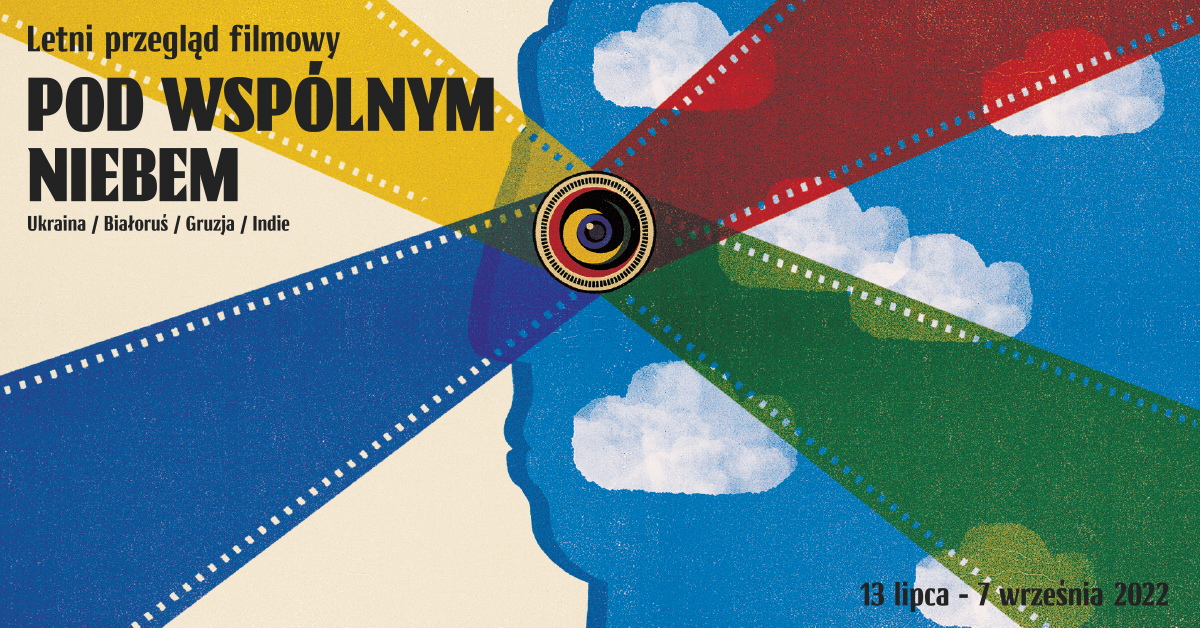 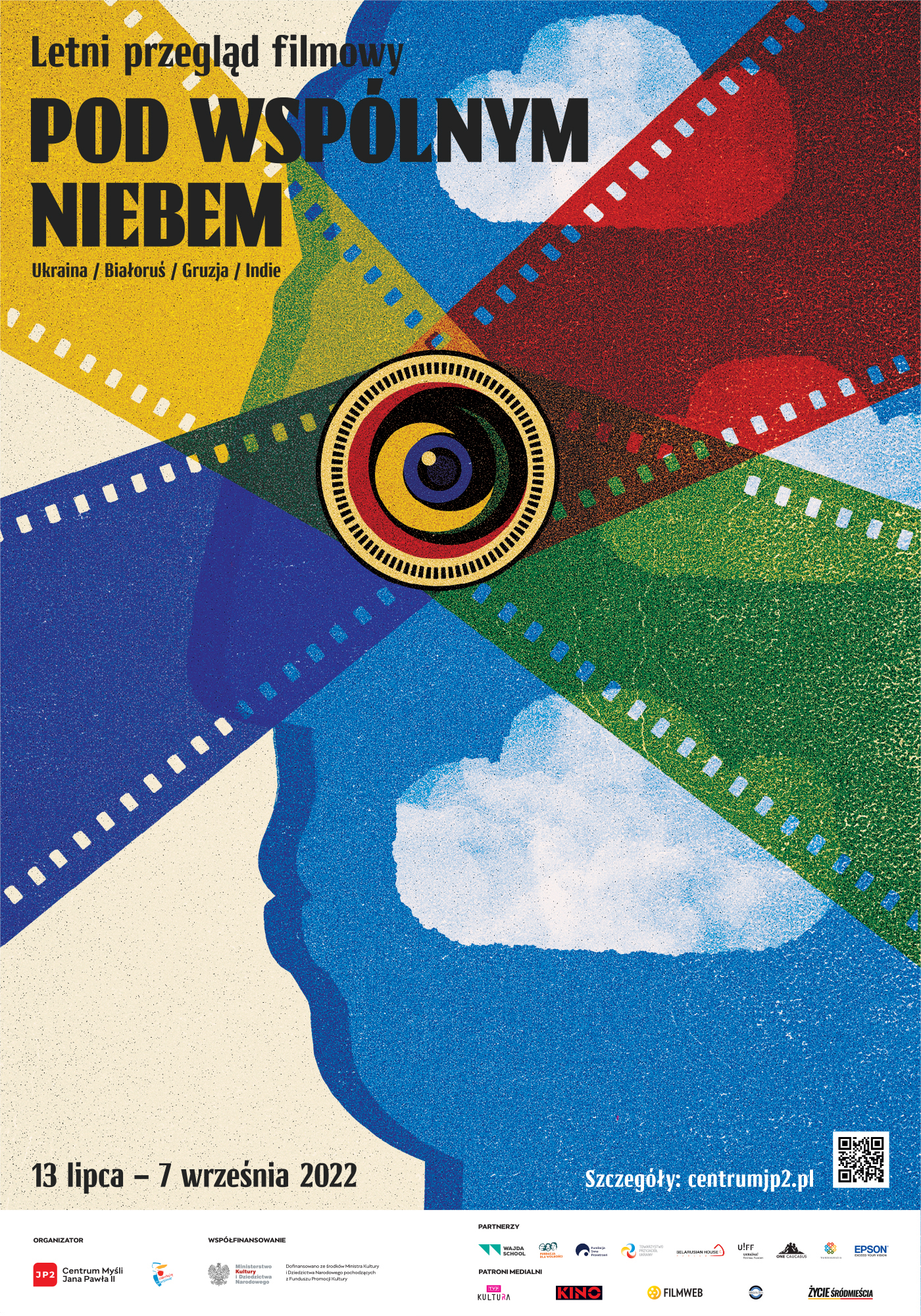 Sit on a deckchair and discover the cinema from a multicultural perspective!

The series of film screenings POD WSPÓLNYM NIEBEM (UNDER THE COMMON SKY) starts July 13. This summer, each Wednesday at 8:15 PM, in the courtyard of our tenement house, ul. Foksal 11, you can watch films from Ukraine, Belarus, Georgia, and India. People from these countries are becoming an increasingly large group among residents of Warsaw. The programme includes nine new productions (2017-2021) with the films as yet unknown to the Polish audience, such as The Great Indian Kitchen directed by Jeo Baby. Before the screenings, at 8:15 PM, you’ll have a opportunity to talk to the invited experts and creators, who will present each of the films and countries.

The main theme underlying the programme is the current social and cultural landscape of Ukraine, Belarus, India, and Georgia. The guiding idea is to provide space for intercultural dialogue with the new residents of the capital and see beyond divisions and stereotypes.

The series of screenings will end with a presentation of etudes and short films by students and graduates of Polish film schools and Wajda School courses.

The event is completed with a series of podcasts about intercultural education, spiritual roots of multiculturalism, and sensitivity to the Other, among others.

ALL SCREENINGS ARE FREE!

Eastern Ukraine, the near future. A desert unsuitable for human habitation. Sergiy, a former soldier who suffers from PTSD, is having trouble adapting to the new reality. He joins the Black Tulip volunteer mission dedicated to exhuming soldiers’ bodies. Through this work, he’s trying to fight his trauma and search for the will to live. Will he learn to live without the war trauma and accept himself the way he is?
Watch the trailer.

Inspired by a true story, the film follows the life of a bereaved mother and a separated wife who are desperately trying to find a new identity, love, and independence. The oneiric ambiance of this quiet but epic film that Sengupta based on the real-life stories and places from his own city of origin brings to mind In the Mood for Love by Wong Kar Wai. It feels good to get immersed in this world, breath the smell of Calcutta by night into your lungs, and get to know its secrets.
Watch the trailer.

WHAT DO WE SEE WHEN WE LOOK AT THE SKY? (2021)
directed by Alexandre Koberidze
drama, 150’
Cast: Irina Chelidze, Giorgi Ambroladze, Vakhtang Panchulidze, Ani Karseladze

Summer, beautiful old Georgian town of Kutaisi. Lisa and Giorgi – a couple on the edge of love – are touched by a curse. They’re mysteriously transformed at night and wake up only to see strangers’ faces in the mirror. When they meet as planned, the cannot recognise each other. However, fate makes them remain close.
Watch the trailer.

A mysterious artist appears in different parts of Minsk. He spreads his canvas and begins to paint. He creates puzzling geometric figures, rectangles and squares… The streets are alive. Curious passers-by spontaneously approach the painter and ask him questions about his work. The man never reveals his secret and replies with a question. He just asks them what they see on the canvas. Step by step we get to know the artist better. He’s Zahar Cudin, one of the most promising Belarusian painters. What are his mysterious rectangles and squares and why does he do that? The explanation will be a surprise for many.

A Belarussian necropolis. For some it’s a place where they can meet with dead family members and spend time on prayer and contemplation. Few others try to look for the traces of the past, some come just to engage into… family feasting. Amid strollers and contemplators, out come cats to creep among the tombs while squirrels look down from the trees. Immersed in deadly silence, the cemetery comes to life from time to time, when the faces from tomb photographs, frozen in time, look at all this in silence.
Watch the trailer.

Belarusian emigrant Anna lives under constant pressure and often takes desperate measures to pursue her creative dream and become successful in the New York City. At the same time, she’s sugar-coating stories of her life to impress her grandmother back in Belarus.
Watch the trailer.

The film tells the story of a newly-wed woman, an educated dancer, who’s trying to be a submissive wife in an arranged marriage with a teacher from a traditional Hindu family. As the time goes, once the infatuation is gone, the events start to take an unexpected turn.
Watch the trailer.

The story of Velya – young Belarusian woman who dreams of moving to Chicago where she could develop her passion for house music. Although obtaining a U.S. visa is quite an achievement, she’s determined to take the risk and buys a letter of intent to hire on the black market. Crystal Swan is a story about a woman, but also about society that waits for a better future, and where the notions of one’s own identity and sense of belonging have not yet been defined.
Watch the trailer.

Presentation of etudes and short films by students and graduates of Lodz Film School and Wajda School courses.

Co-financed by the Ministry of Culture and National Heritage from the Fund for the Promotion of Culture – a national special fund.